Would you like to know what’s going on inside the mind of your child so that you could know exactly what you should do to best help them succeed in their sport and be happy?

Well, I have guided to success literally hundreds of young athletes and performers one on one in my office and thousands more online worldwide. You are about to benefit from that insider experience!

What you need to know about building confidence in your kids

If you truly want to give your kids a boost to success, the first thing you need to do is stop doing these 3 things that hurt your kids’ confidence so let us get right to it with #1.

1. Giving your kid encouragement, praise and cheers ONLY when they do well out there.

Most of us adults have forgotten what it’s like to be a kid. If I didn’t see them for years now, I would have too. Here’s what you need to understand:

What you need to do is:

You may just be showing your disappointment in empathy for them but that’s not how they are taking it. This is a huge confidence killer.

2. Telling your kid how they could have done better on the car ride home.

Or otherwise giving unsolicited advice at any time right after a poor performance or a loss. Most often, the best thing you can do as a sports parent is nothing.

If your kid ASKS for advice and help on what they could have done better, then yes, of course, give it.  Do your best to be objective about what you observed in delivering your advice and avoid any judgement. Judgement is ultimately the confidence killer.

If you ever watch little kids play in the sandbox together and one of them upsets the other, there’s crying and finger pointing for a few minutes and then after a short time, the kids are right back in the sandbox playing again like nothing happened.

Kids have a much greater natural ability to let go of difficult events faster than us adults. We learn how to hold on to things as we get older because we have all this complex thinking that requires full mental resolution on things.

Kids don’t have that yet and can develop resiliency through difficult events, if allowed to. That’s what we should want for them for their participation in sports, life skills like resilience.

3. Stop delivering typical sports cliches and trite sayings that mean nothing to a kid like:

“You just have to believe in yourself”
“When you’re out there, you have to be focused”
“Stop overthinking”
“Just go out there and have fun”

This is my personal pet peeve having worked in this area for so long, and youth coaches are the worst offenders. Think about this, can you explain to a kid HOW to believe in themselves? Can you give them the steps to “Stop overthinking?” Or how about that vague command to “Get focused or get your head in the game?”

They don’t know what any of that means, let alone HOW to do what you are telling them.

And so what happens?

You create confusion, uncertainty, worry that they “Aren’t doing it right” and will ultimately disappoint the adults giving them the advice.

So, instead of the kid just playing in the present moment with their body, which they do naturally and don’t have to be told HOW to do, by the way, we teach them with these silly cliche’s to get in their head and their useless fear-based thoughts.

Also, you might think that telling them to “Just go out there and have fun” is good advice and it CAN be but it is a risky move.

The whole culture of youth sports is organized around winning and how well the kids perform. There’s no question about that. Coaches, parents in the stands cheering good play and being disappointed in poor play like I already mentioned and other messages constantly coming at them like:

Did you win?
How did you do?
Did you start today?
Did you score?
How many points? etc.

If that isn’t enough, kids base their identity on whether or not they get playing time, make the team, get to the next level and even their friendships are centered around this. These messages are constant and everywhere.

And then you go and tell them to “Just go out there and have fun.” They hear that and at best, they forget it after 2 minutes and slip back into the whole performance-centered mentality they’ve been overwhelmed with. And at worst, subconsciously destroy their confidence in advice from you because of the mixed messages.

The worst irony of of it all is:

The parent or coach is giving the advice with the hopes that it helps their performance when in actuality, it hurts it.

I’ve got lots more advice for you as a parent or coach and tips you can directly pass on to your child for how to perform under pressure and a guided visualization to go with it. Oh yeah, and my ebook: The 10 commandments for a great sports parent. I’ll send it all to you in email. 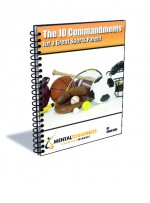