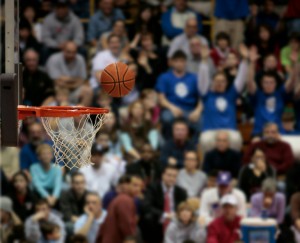 Being able to master the metal game takes time and experience. A young basketball player will be mentally strong through his/her experiences.

I started to gain mental toughness at an early age when my older cousins started pushing me around. I was able to transfer that state of mind to the basketball basketball court by saying in my head that, “I’m the best player on the court!”

I used to say that before every game, no matter who I was playing against. This mental drill has definitely helped build self-confidence, strengthen my mental game, and brought some light to my hard work-ethic.

I knew I was good, but I had to believe it. Players will be measure by their skills, but when I was recruited by colleges, all the coaches wanted to talk about was my mental fitness on the court, not my points. When a professional scout looks at a player they begin to measure certain things about the player. The scout can measure his height to see if he/she is tall enough to play a certain position.

The scout can use that information to make an estimate of what position the player may play. The scout can also measure the player’s height, weight, and in some instances they go as far as to measure wingspan, shoulder width, and hand size.

Then the scout will do some performances measurements on the player: vertical jump, speed drills, bench press, etc. But there are some very important things that can’t be measured. They can’t be put on a chart; one of them is the mental game, it varies from player to player!

It doesn’t matter how big or small a player is, if they are mentally tough, they can be successful from the youth level to the NBA. I truly believe that my mental toughness is what ultimately earned me a professional contract overseas at 5’7”!

Mental fitness comes with preparation. Like many adults who join the gym for a month and then get bored and quit, many youth basketball players will train hard for a month or two and then lose interest. It requires intense mental strength to show up for practice every day and prepare accordingly.

These youth basketball drills are not easy and they don’t work every night. A player has to be consistent with his practice. This is often what separates the successful players from the unsuccessful ones. Many players who are athletically gifted when they are young, do not have the mental determination to prepare and are passed up by harder working, tougher players who are less athletic.

That was me, the short, un-athletic kid, who had the desire, mental toughness and persistence to excel in basketball. Another aspect of the mental game which directly affects an individual’s success on court is the ability to be mentally strong within competitive environments.

The pressure of the game can crack even the toughest of players, but some players just have the mental strength which allows them to succeed no matter what. Being mentally prepared on game nights begins even before the tip-offs. Players need to be focused and visualizing what they need to accomplish in the game.

Unsuccessful players are often playing around or distracted before the game begins and aren’t prepared to win when the ball is tossed up. I used to dream the night before each game and think about how the game would play out. I won every game in my dreams, too bad I couldn’t win every game in reality.

For the most part, mental toughness started in my head, and head first. Once the game starts, players need to maintain their mental game for a variety of reasons. Their team might be up by a bunch of points early, and the mentally weak team will likely take their foot off the gas and let the other team back in the game. Likewise, their team might get down by a lot of points early on, and they have to make sure they don’t quit. The mentally fit player will continue to work hard no matter the score.

This same principal applies to individual performance. If a player is struggling, he/she needs to stay tough and keep competing. Wendy Lynn’s article “How to Motivate Your Child out of a Slump” states, This is where your son learns the very valuable lesson of discipline and persistence. He may want to give up trying or quit altogether.

Having the mental strength to work through adversity will help every player succeed in sports and life. This is what separates the successful from the unsuccessful.

Physical abilities can only take a player so far, it’s what is “Between their Ears” that will determine how much they will achieve. Helping players learn to be mentally tough will help them develop skills to use the rest of their life no matter what profession they choose.

Basketball was an avenue of mental toughness for me. It made me tougher on the basketball court, helped me master the mental game. Learn to have a fearless mind in whatever you do, so that you can overcome any challenge.

Did this article inspire you to perfect your mental game, do mention your thoughts in comments…

Lamar Hull is a former Davidson College student-athlete. Lamar had the great opportunity to play under the well-known coach Bob Mckillop and with superstar Stephen Curry. Lamar played professionally in Europe. Lamar currently resides in North Carolina and is looking to help young kids fulfill their dreams in playing basketball at the next level. Lamar is currently writing an ebook titled, “The Beginner’s Guide to Become a Better Basketball Player”. Lamar can be followed on his inspiring basketball website at inspirationalbasketball.com and @lamarhull20.