Most of us think that we already know what does mental toughness is, but the truth is we still needs to develop and learn. It’s not about how young or how old you are, the real deal is have you develop your mental toughness on its peak.

Discover Learn from Pro Baseball Player: How To Develop Mental Toughness by watching the video below.

What mental toughness means is being able to overcome adversity, being able to be honest and truthful with yourself during failure.

At the end of the day, youas a player want to be successful.

You as a parent want to give your child the best opportunity to be successful.

The best thing you can do is prepare them with building true confidence. If I were to change anything, I would be focusing more on building my own confidence than caring about what other players or coaches thought about me.

At the end of the day if I have confidence, then I will be successful.

You signed me, you paid me really good money, three quarters of a million dollars, so why all of a sudden do you not value where I am coming from and are you are attacking me?”

I would say the most important thing that players and coaches should know when talking to scouts, is that these are the people you are going to be negotiating against at the end of the day. Their organization is trying to gather as much information.

For the player, when you are out there on the field and you see five or ten scouts that have their radar guns up, at the end of the day they are there to find talent.

If you have talent, just be who you are, be yourself, and don’t over throw.

In 2001, I threw a 91 mph fast ball and it came back to hit me in the knee at 103 mph and that directly affected my balance, my coordination, my timing, so my mechanics were all thrown off. The next year I worked real hard in the off season and the following year I led AA strike outs and did real well.

In 2005, I started having some balance issues again. The seed from the injury was in the back of my head, so while I was in the gym after one of the bullpen sessions, I had a 20 pound sandbag on my shoulder and I leaned to the right side. I immediately felt my glut, which is what my coaches were trying to get me to feel.

Shortly after that in September of 2005, I created the balance pro sport belt, which was to help athletes with balance. About a year later, that application was found to help children that have sensory disorders.

A lady out in California called me, her name is Catharine Behan. She worked at the time at a school called the Sierra Academy, which is a school for autistic children. She called out of the blue and said, “Hey! I have one of these belts and it has been helping to calm me down.” She has ADHD.

She took it to the school and she tried it on some of the autistic children and it helped reduceself-stymie sensations in the children. “Wow! I put the belt on and it really helped to calm them down.” 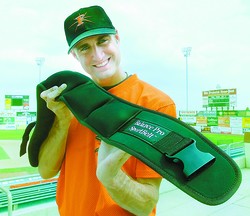 Matt Bruback, the MCC’s No. 1 pitcher, named to the all-state team as a freshman, and in one of his games had a career-high 16 strikeouts.

The Cubs signed Matt as their right-handed pitcher in 1998 after his freshman year. Matt got traded from The Cubs to the San Diego Padres and than was traded again to the Baltimore Orioles.

Matt says his main goal is to help as many children with developmental disabilities as possible.