Read the story about minor league baseball player Donnie Webb, from Rick Allen, the Founder of 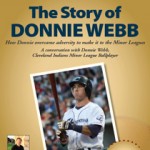 Informed Athlete. This inspiring story tells how Donnie perseveres, works very hard and is extremely determined on fighting through setbacks…

Here’s some of Donnie’s story and advice… It started happening in my sophomore year, when I tried out for the high school team and got cut. The coach told me I wasn’t strong enough, big enough, didn’t have a good enough arm. I was a little guy back then. I tried hard and though I wasn’t the most athletic kid out there, I sure gave it my all. But, the coach cut me anyway.

I was definitely discouraged and when he told me I was heartbroken. All my friends were playing and I wanted to be with them. I didn’t know what to do. I had been playing baseball all my life.

I tried out for the summer ball team the following year, mandatory to get onto the high school team. I didn’t make it that summer, so I thought I should go after the weights a bit. Every other day after school was out, I went down to the Arena and had my workout.

I made the JV team that junior year. I guess coach thought I was getting bigger, a little stronger and finally made the varsity team my senior year. I made All-State and even got a few awards on the team.

Donnie goes on to play his freshman year at D2 Northeastern State University and then moved on to the D1 level for Oklahoma State. Because of an injury he was red-shirted and had to watch that year.

I definitely did not have an assured spot out there…I was still battling for it. The coach decided to bench me. Some of the guys couldn’t believe it and I couldn’t either! But, it was one of those deals where I thought, whatever is best for the team. I had my head on straight and kept going forward and didn’t get distracted from it.

They have a rule for all first year draft guys – the first month they can’t adjust your swing, they can’t do anything for you. They let you be, no matter how bad you do….they want you to show them what you’ve got. I was just struggling, couldn’t do anything right.

To get the entire Donnie Webb story, click here. What you will learn from Donnie’s story is how he believed in himself, his ability, his work ethic and his attitude.

On Being a bench warmer:

It all falls to opportunity; succeeding when given chances to do something.

It’ll all equal out in the end. If this happens at a young age, kids are disappointed at that time, but they have to realize what’s going on, keep their mouths shut about it, be a team player and just try to achieve and go to the next level. It’s out of your hands, there’s nothing really you can do. If you go hard in practice, eventually it’ll work out for you.

Advice from Donnie’s mom on how to talk to your child after they are cut from a team:

I remember Donnie calling in when he got cut from the high school team, but I remember him actually apologizing for not making the team! I told him “You don’t have anything to apologize for! You have the skills, you’ve got the determination!”

He said, “I want to go for it!”, and I asked him “Tell me what you’re going to do about it?” He told me he was going to get bigger, stronger, faster – he wanted to be an athlete. I told him, “I know he can do that, and to do it and not let anyone stop him from fulfilling his dreams”.

To learn more about NCAA recruiting and eligibility, check out Informed Athlete.