Skip to content
How to Convince Your Teen For Mental Drills?

For parents, it is very difficult to watch youth athlete struggle in sports, no matter how good it is for them.That is one of the reasons, in this article; we discuss some mental drills which will help them in becoming mentally strong and achieve peak performance.

Like every athlete parent, it is painful to watch their kid excel in practice but choke in the big event. This not just affects parents, but also effects athletes; not being able to perform in big event makes them lose confidence and doubt their abilities.

Craig, Mental Toughness Trainer, helped one father, a former Olympic medalist, help his son the importance of mental drill. Watch this video, and the answer might surprise you… 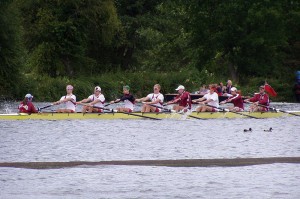 Here is a situation that the father kept in front of Craig, we hope that reading this will help you understand, how and why you can convince your young athlete for mental drills.

I have been following you for a little while now, and I have to say you have great stuff! I am really impressed with the resources you are offering. As a former Olympic medalist in rowing, I understand the importance of the mental component of competition and training. I am wondering if you can help me, help you, make $97? I’d love to buy your program for my son, but so far he has said he’s not really interested.

A little background about the athlete:

He is a big 15 year old basketball player, who is really good, but he could be better. The main issue is assertiveness. It’s getting better, and when it ‘turns it on’ he dominates. Many times he shrinks from the moment, plays tentative, and generally does not live up to what he displays in practice. I could be wrong, but that seems to be a mental thing, not physical. 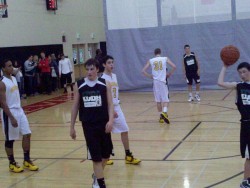 I showed him your video where you talk about the basketball player and perfectionism and I think it made sense to him. I have had him speak with a lady I know that does mental training (another Olympian) and she gave him some exercises that he said helped. His coach understands and has been giving him some ideas on being mentally strong.

I just think, what we are doing now is a little piecemeal and he needs something more comprehensive, something similar to your program! When I mentioned that to him, he said he’d rather try the stuff he’s been given for now. Made sense; and I think, it got a little overwhelming for him so I backed off.

He had a game yesterday, where he started strong and then in 2nd half, when the other team started to get on roll, he started to play tentative again. The coach sat him. I had to drive home and read your 10 Commandments for Parents article before I talked to him. I see what he needs to do and how much some comprehensive mental training could do to help and I don’t want to force it on him – wouldn’t work anyway.

Any ideas on what can I say or do to lead him to the conclusion that he should give mental drills some serious consideration and specifically, your program?

What was the parent advised that made him convince his Kid:

Good thing that you went back and read the 10 commandments! So for starters, you want to pick your time and ask him if he would like your advice and feedback about his game. If he says ‘no’ then you have to honor that. That doesn’t mean you can’t keep asking that periodically and at some point, he will say ‘yes’. Ask him when/how it would be appropriate for you to offer that guidance.

Once he says ‘yes’, the best way for you to help him is to stick with asking questions. Try to get him to come to a conclusions without telling him directly..

The kind of questions that you can ask is:
So son, what do you think held you back from performing your best in the second half today?
Were you aware, you weren’t playing as well in the 2nd half?
What was that like for you?
How did you feel when you noticed other team catching fire?
What did you observe about the other members of your team?

Your goal with these type of questions is to get him to recognize that his performance dropped him due to his perceptions, thinking, and emotions in the midst of the game. And that there’s no amount of practice or perpetration that will change that if the mind doesn’t change.

If you find another good time (timing of these conversations is important), then see if you can point to other games where his play dropped off or was exceptionally good, and using questions only, get him to see that he plays best when he is thinking and feeling confident. Feel Good = Play Good.

Too many athletes think that ‘feel good’ just happens by some magic and they just hope and pray that they fall into that. The fact is, feeling good is a mental drill, which can be learned and developed, just like any other physical drill. 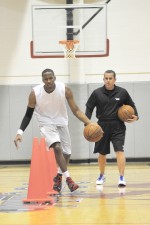 Bottom line, your job is to get him to see that his mind determines his level of play. That’s great but there are countless athletes, who worked themselves to death and never made it to the next level. In conjunction with that, I would put together some quotes, and/or videos from famous athletes and coaches about the importance of mental game…

You have to expect things of yourself before you can do them. – Michael Jordan

Everything negative – pressure, challenges – is all an opportunity for me to rise. – Kobe Bryant

“Once you’ve done the mental work, there comes a point you have to throw yourself  into the action and put your heart on the line. That means not only being brave, but being compassionate towards yourself, your teammates and your opponents.”,/u> – Phil Jackson

“Morale and attitude are the fundamentals to success.” – Bud Wilkinson

“Basketball is like photography, if you don’t focus, all you have is the negative.” – Dan Frisby

“You have to be able to center yourself, to let all of your emotions go. Don’t ever forget that you play with your soul as well as your body.” – Kareem Abdul Jabbar

Did these tips and quotes help you convince your young athlete agree for mental drills and fitness? Do share your experience in comments…

If you want to learn more about helping your child perform under pressure go to: Youth Sports Mental Toughness to get your free guided visualization .mp3 download: “Perform Under Pressure” that your child can listen to on their ipod right before a game to get into a peak performance zone.