What is the best way to achieve peak performance and Building Mental Strength in athletes?

To answer this question, we wanted to share with you Bob Adrian’s tips and strategies for coaches. Bob trains coaches on “Best Coaching Practices”; and in this article offers many great ideas and suggestions on how to cultivate an attitude of mental toughness…

Quite often coaches lament about their teams when they are struggling to compete successfully by saying that their team lacks mental strength. Even Boston Celtics coach, Doc Rivers, called his team ‘soft’ after a number of “mediocre performances” early this season.

What do your coaches and trainers actually mean when they are talking about mental strength or peak performance? Do the players actually understand the concept? Is it possible to train young athletes to build mental strength; when many of them are accustomed to instant gratification from being able to tweet, text and post instantly?

Quite often military metaphors permeate athletic competitions. Invariably in their inspirational pre-game speeches, coaches will characterize the upcoming game as a battle to be won. Phrases like ‘It’s going to be a war out there’; ‘We have the weapons to get it done’; Whose warriors are going to be left standing?’; ‘We’ve got to out tough the enemy!’; are quite often quoted in pre-game pep-talks.

Some of the sports do demand physical strength, but an athlete can only be as tough physically as he is mentally. Retaliating against an opponent in front of the referee, for example, is a sign of mental weakness (and emotional)..

It is not easy to teach the complex concepts of mental toughness. Before we teach athletes to be mentally strong, we need to understand its various interrelated components.

Grit is the combination of passion and resistance. It demonstrates an athlete’s and the team’s tenacious and indefatigable determination to reach their goal. It also maximizes peak performance.

Will or resolve is the unswerving commitment each athlete makes [to do whatever it takes] to bring out the best in their team. A strong willed team or athlete will understand that it is not about the ‘need’ to win, but about the ‘will’ to win, that matters the most. Such ‘resolves’ can easily be sustained throughout any athletic competition. Thus, individuals and teams are capable of ‘sealing the deal’ by closing out competitions, resolutely.

Ambition is an athlete’s ability to channel personal desires into larger team goals. Athletes should focus on what they can do as a team rather than what they can get from being a part of the team.

When an athlete has the courage to risk failure; the willingness to learn from his/her mistakes; and the confidence to confront adversity and use it as a motivation to grow and develop; then he has resilience.

The ability to maintain composure, poise, and mental calmness in situations of pressure and stress in order to be successful is equanimity. 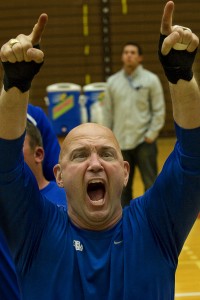 When equanimity leads to a state of extreme concentration, then an athlete is said to be intense. An intense athlete is not ‘tense’ but instead, ‘relaxed’.

When an ‘athlete learner’, acquires the knowledge and understanding, along with the qualities of self-control and self-restraint, then it is called self-discipline. Such an athlete knows what to do, when to do and how to do it; and can contribute to the team’s collective self-discipline and performance. Improved self-discipline means improved self-confidence.

An accountable athlete has the ability to ‘look in the mirror’ and own responsibility when things do not go well; and at the same time, ‘look out the window’ and credit others when things do go well in a team’s performance. Mentally tough athletes should be able to hold themselves accountable for what they can alone control in their performance. They need to set controllable goals and well-focused strategies to achieve those goals.

A focused athlete realizes the importance and power of being in the present. Of being able to be ‘in the present moment’ and let go of every moment as it passes, good or bad, to move onto the next moment. Life is indeed ephemeral, and it is easy to miss out the present moment to get better by clinging to what happened in the past or what could happen in the future.

With distractions (from within and without) abound, the mind wanders amidst the ‘clutter’. A mentally strong athlete is completely ‘awake’, that is, they have no division between the self and the experience (shooting a free throw, serving a tennis ball, navigating a slalom gate, striking a ball on goal, knowing where to move on a zone press, etc.) at each moment that experience is taking place.

An athlete’s humility and trust (in coaches and teammates) that allows them to abandon their ego and ‘surrender’ to the team; in order to become a better player and to improve team performance, is called selflessness. Selfless athletes are more ‘awake’ and focused along with being more self-disciplined, self-confident and self-motivated.

As Jim Collins argues in his seminal work, Good to Great, that ‘good is the enemy of great;’ a mentally strong athlete recognizes the ‘curse of competence’.

How do you get to Carnegie Hall? With Practice, practice, practice… of mental toughness. Even after achieving the pinnacle of success in his profession by winning three Super Bowls, New England Patriots quarterback, Tom Brady used to say that he approached every practice as if he were “trying out for the team”.

To put it in another way, if you know you have to walk 100 miles, then you should reckon that 90 miles is halfway.

The virtue of practice lies in the opportunity for individual development, team building and especially trust building. It is the creation of a team culture that ‘leaves no doubt’ about a team’s identity, and a selfless, relentless commitment to pursuing greatness.

Keeping these components of mental strength in mind, what can we observe from mentally strong soccer players? Here are a few examples players that are strong mentally.