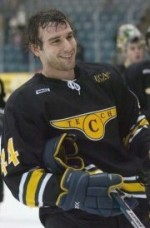 Sports visualization is a one of the most powerful tools an athlete can use to play with a strong, focused mindset. Learn how to play ahead mentally, before the game starts and to execute your strategies in your mind before you actually play the actual game.

This is Part 4 of a series from an interview with Jamie McKinven, who is the author of the book,So You Want Your Kid To Play Pro Hockey?

In this video Jamie will share to us how he used sports visualization as an effective tool in improving his actual game performance.

Before the game, we would always get there about two hours ahead and you had a bit of a down time to do something to help you motivate yourself.

I used to take my sticks up to a dark corner in the arena and look over that blank sheet of ice and I would put on some music that motivated me.

I would sit there and I would focus on that ice surface and I would play the game out that I was about to play in my mind.

I would go through every situation that I would possibly find myself in the hockey game and play it out. I would sit there for half an hour.

Then as I was visualizing the situations, the end game situations that were going to occur, I was always succeeding in every one of these situations.

I was coming out on top. I was victorious in everything I was doing. So that when game time comes around, I had already played the game.

I think it gave me a little bit of a quicker reaction to everything I was doing. It might have been just a split second play, but I really did feel it benefited me.” 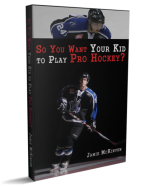 Get Jamie’s book “So You Want Your Kid to Play Pro Hockey” by clicking here. It lays it all on the line to enlighten hockey fans, parents, critics, arm-chair coaches and players alike about a world beyond slap shots and penalties.

If you ever wondered what goes on behind the scenes, between the whistles, and on the road or you just want a trip down memory lane, grab a cold beer or hot coffee, put on your favourite Gordon Lightfoot album and get ready for a riveting ride.