Skip to content
Believing You Can Win Makes All The Difference 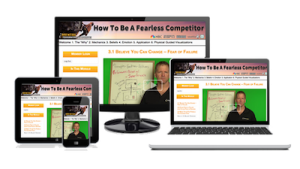 I once worked with a world class athlete who had competed at and then fallen out of the pro ranks and was trying to get back in. In fact, she had been going against the top players in the world in her sport 2 different times in her life. Both of those periods were for only a year or so and then her performances dropped and she was out.

Everybody told her that  she had the game and the skills to beat the best players in the world. She would even show those skills during practices but those skills seem to desert her whenever it was time for competition.  She told me she wanted to learn how to gain self confidence.

As we began our work together, it became very clear to me that her problem was a deep-seated belief in herself that she didn’t belong out there playing with the best.  She knew, consciously that she was good enough to play with anyone but, she just didn’t believe at her innermost levels of the mind that she could compete.
She said that she just didn’t feel like she belonged at that level.

How do you get confidence in sports?

Well, the hard (and sometimes slow) way is to wait until you have some success and then you will gain confidence.  But there’s a problem with that too.  If your confidence is based on current success, then you know what happens when you have a run of no success.  No confidence, right? Every athlete goes through periods where they just don’t play as well as they normally do.

Baseball players lose confidence when they get into slumps.  Basketball players lose it after missing a few shots.I could go on and on but nobody plays their best all of the time. Even the greatest athletes of all time:

“I’ve missed more than 9000 shots in my career. I’ve lost almost 300 games. 26 times, I’ve been trusted to take the game winning shot and missed. I’ve failed over and over and over again in my life. And that is why I succeed.”
Michael Jordan – Basketball great

The way to build confidence in sports is to install a belief in the athlete.

If you have a belief programmed into your power mind that is something like this:

then any time you get in a position to win or perform your best, that belief can be activated like a computer program or app and literally interfere with your muscle movements and destroy your skills.

How do you remove destructive beliefs and install a helpful one?

These are the 2 most natural times when we form beliefs but there is a third way and it’s one of my most powerful tools:  guided visualization.

You can learn how to gain confidence by being the master of your own beliefs through guided visualizations.  I’ve assisted tens of thousands of athletes with my guided visualizations that reach down past the thinking mind and into the power mind, if you allow it.  Honestly, it’s my most powerful tool out of all the things I do with athletes and it is the most effective way to change beliefs.

To become confident in sports, you want to have beliefs like this:

In my Mental Toughness Academy, I have 8 guided visualizations, one for each module.  I create custom-tailored sessions for athletes when I work with them in person.

After I assisted my world-class athlete to eliminating her destructive beliefs, all of a sudden her play become consistent. No more blowing leads and no more giving up when she was down.  She became like a machine throughout her matches and made it back to the pro ranks. She was shocked at how easy it all was.

Change your beliefs and you will start feeling confident, when it counts.