Winners never quit and quitters never win! Teaching perseverance to your youth athletes will definitely set them on the path to success not only in youth sports but also in life!

In this video, Peter Vidmar shares how he got powerful motivation to persevere from a bulletin board in a cafeteria and what he saw in his father as he grew up.

Have something to say? Make it known by leaving a comment below!

This was before I even became a gymnast. I had this desire to make good at something and to reach some recognizable level, so I was competitive looking back.

Then I fell in love with gymnastics. When I got involved in gymnastics, I was able to channel that desire and passion into a sport that I had really fallen in love with. I had a great coach, who was an Olympian, who had been there and done that. I had everything fall into place for me.

Deep down inside when I was young, I had this desire to excel. I had examples around me too. I had a father who had suffered through polio and has been somewhat handicapped ever since and has always had a positive self image. He never gave up and he never had to tell us, “Children, we don’t quit.”

He just lived it. He never looked at us and said, “Don’t quit. This is the family model.” No, he just lived that. He was able to support his family and have a career and deal with these physical setbacks that came about frequently.

We saw that example. I had to go home every day to that guy. I couldn’t complain in the gym about these brutal workouts that my coach would give me when I had to go home to him, because he never complained about anything.

His quiet example helped me become an OLYMPIC CHAMPION.

To go to the next part of this series, click here!

If you missed the first part of this series, click here! 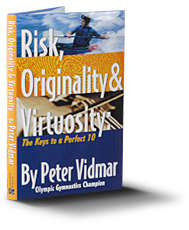 Peter Vidmar, the highest scoring American gymnast in Olympic history, is a leader in the Olympic movement today. He has worked for many years as the gymnastics commentator for CBS Sports and ESPN.

Peter is also a powerful and entertaining speaker at corporate meeting and trade shows. With over 2 decades of experience, he helps people throughout the country realize their full potential with his message of Risk, Originality and Virtuosity.